Pension schemes and their advisers reveal their predictions for the next twelve months, reports Laura MacPhee

It’s that time again. The end of the year is often a period of reflection and planning for the coming 12 months, and it is no different for institutional investors. Headlines announcing the green shoots of economic recovery have been cropping up more frequently, and confidence levels have been rising correspondingly.

We decided to gauge opinions from pension funds and their advisers in our Investment Sentiment Survey 2014.

Which asset classes will schemes and consultants be putting their money on next year, and could their plans risk being derailed? The developed economies have been making a tentative recovery so far and more than half (55%) of respondents thought the UK’s economy would continue to improve moderately throughout 2014.

Confidence was even higher for the global economy as a whole – 60.8% of respondents thought there would also be a modest recovery here as the year progresses. This has translated into cautious optimism. “There’s been a big swing round in a lot of these survey indicators, which tend to be good leading indicators of economies, but they’ve been remarkably positive,” says Simon Hill, chief investment officer at Buck Consultants.

He puts this down to the release that follows a period of psychological depression – although unemployment remains high it has stopped increasing so rapidly, which has had a very positive effect on confidence. But investors should beware the potential impact of policy decisions and other unpredictable events, such as conflict in the Middle East.

We asked our survey respondents which factors they thought were most likely to undermine a global recovery in 2014. Anecdotally, it seemed there was a geographic shift from last year.

Political instability in the Middle East was considered a greater problem than the eurozone, with 16% selecting the former and 14% the latter. The most common answer was a lack of political consensus in the US on fiscal policy, which kept on threatening to bring the world’s biggest economy to its knees throughout 2013.

It is clear this threat has not gone away, so investors will still need to be aware of when these issues are likely to fl are up, and the potential impact they could have on investment performance. Andrew Parry, chief executive of Hermes Sourcecap says: “Where the US leads the rest will follow.”

All eyes, therefore, will be on the North American situation to see how the developed markets are likely to perform in 2014, particularly as the appointment of Janet Yellen as head of the Federal Reserve brings an added layer of uncertainty, especially as quantitative easing has been proven to have such an impact on confidence and returns.

Turning the spotlight back on the UK, we asked survey respondents to predict how long the Bank of England’s monetary stimulus programme would carry on.

Twenty-two per cent said they expected quantitative easing to continue until the second quarter of 2014, further distorting the bond markets and causing yields to rise. Schemes will need therefore to be cautious about their fi xed income allocations, and work to ensure members are adequately informed about the impact on annuities and any measures they may have taken to hedge against interest rate risk.

While 28.9% of scheme respondents expect to increase their allocation to bonds, just 10.5% plan to decrease it with the vast majority planning to hold fixed income at existing levels. “It would be natural for bond yields to rise (as quantitative easing is tapered) as they generally do anyway when the economy recovers,” says Randells.

“The implication is that the return from bond yields will only come from the running yield (coupon) rather than any capital gain.”

THE FLIGHT FROM EQUITIES

Pension schemes still expect to continue shifting their asset allocation from equities. While most schemes expect to maintain their allocation to equities at the same level in 2014 (48.7%), more believe that this share will fall (35.9%) rather than rise (10.3%). Nevertheless, the investment outlook looks promising for equities, believes Hill.

“I’ve been positive about equities all year – I’ve felt that we’ve had more activity in the UK economy than the official data was showing,” he says. The story is positive for both developed and emerging market equities – as Hill points out, equities are up 15-20% on a year ago, which counts as a good year.

Emerging markets seemed more of a concern than their developed counterparts – 12% of respondents thought the greatest threat to global economic recovery was a slowdown in emerging markets, reflecting their growing significance on the world economic stage.

Three quarters think there will be a moderate recovery in 2014

Commenting on the tender, Mark Fawcett, Nest’s chief investment officer, says: “These emerging markets mandates will allow us to further access an asset class with the potential to deliver good growth for our members as well as greater scope for diversification”.

Schemes will still be looking to achieve this diversification throughout 2014, and it will also come from property and alternatives. Parry predicts that interest in commercial real estate will spread past the M25, and out of London and the southeast, reflecting a wider consensus.

Infrastructure has also maintained its appeal for institutional investors. “Listed infrastructure is providing a reasonable yield,” says Pease, “and I wouldn’t say it’s expensive yet.”

The number of global infrastructure projects is beginning to pick up in line with this appetite. “As a sign of optimism that’s quite an encouraging one,” says Parry.

“When companies begin to see government spending on infrastructure, which is after all a very long duration return investment, that encourages them to up capital investment.”

These are all positive signs, and the outlook looks fairly bright for the 2014 investment landscape. Now pension schemes need to make sure they are in a position to keep track of these asset classes and be ready and nimble enough to take decisive action where appropriate. They will need to seek help from their advisers to achieve this effectively, whether they choose delegated or more traditional investment management.

Previous post Diversified growth funds have seen a surge in popularity – but do they live up to the hype? 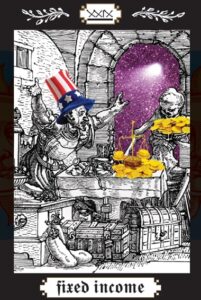 Fears at the Fed

The search for true diversity